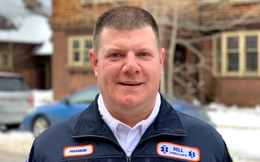 Chris has been Operations Director for Bell Ambulance since March of 2008.

He became an EMT in 1999 and a paramedic in 2004.  His entire EMS career has been spent in Milwaukee, beginning with two years of full-time ambulance work, followed by various supervisory and management roles which led to his current position.  In this capacity, Chris oversees all aspects of the operation of the company, from licensed ambulance personnel, maintenance of the fleet and facilities, to supplies and equipment.  Chris enjoys working with other EMS leaders to further the interests of this unique industry.

Chris is the President of the Professional Ambulance Association of Wisconsin, having first been elected to the board in 2011, where he strives to increase the quality of EMS in Wisconsin. In 2017, Chris was appointed by Governor Scott Walker to the Wisconsin EMS Board, where he was recently elected Secretary.

Share legislation, regulations, and best practices with fellow state ambulance association leaders from across the country!

Effective legislative and regulatory advocacy in your state can make all the difference in your Medicaid reimbursement. Get strategies, examples, tips, and tricks for everything from Medicaid Match (UPL) programs to crossover payments to traditional rate increases from our expert panel.